Last week we released first version of TeraFlow. The source code of the first version of the TeraFlow OS SDN Controller is publicly available for download and installation at the GitLab repository under Apache2 license. It has been designed as a cloud-native application with a potential remedy to the limitations of monolithic software. It is architected using micro-services (i.e., small, loosely coupled, computation services) that cooperate to realize the SDN controller activities, via network messages. This design enables easier replication of the services allowing greater dynamicity, increased scalability, better load balancing, and high-availability features.

Zero-Touch Automation aims at completely automating the network management process with unquestionable benefits in terms of:

Another important trend gaining traction in Beyond 5G scenarios is NFV which aims to move network functions (e.g., firewalls, routers, baseband units, etc.) away from proprietary hardware appliances into decoupled and softwarized components running over virtualized infrastructures. Virtualized Networking Functions (VNF) can then be deployed throughout the network where compute resources are available. The demand for improved quality of experience for the users has motivated the deployment of some VNF, such as Content Delivery Network caches, at the edge, to reduce user-experienced latencies.

To fulfil the demanding levels of automation at the network, service, and application tiers and provide the appropriate support to telecom operators, the TeraFlow SDN controller has been integrated with the ETSI OpenMANO NFV framework.

This demonstration will showcase a proof-of-concept of a B5G-ready cloud-native SDN controller that integrates with NFV framework, and real and emulated equipment, all using standardized interfaces. The capabilities of the TeraFlow OS, and the integration of its components, and with external frameworks, will be validated by means of two workflows: zero-touch device bootstrapping and monitoring, and L3-VPN service management.

The TeraFlow OS components are implemented as microservices in Python (except Automation that is implemented in Java); they are deployed on top of a Kubernetes-based environment and rely on well-defined TeraFlow-specific gRPC-based messages and services for their internal communications.

The Kubernetes environment is deployed at CTTC premises in Castelldefels (Spain). The Data Plane is distributed in two geographical locations, that are interconnected by means of a secured VPN connection. The emulated optical layer, located at CTTC premises, is controlled by means of an OLS Controller and exposes TAPI at its NBI. The packet layer, located at Telefónica I+D premises in Madrid (Spain), consists of 2 Infinera DRX30 routers controlled by means of Netconf/OpenConfig for both the configuration and the monitoring of the devices.

The next figure illustrates the architecture of the demonstration including the ETSI Open Source Management and Orchestration (MANO) (OSM) to issue L3-VPN connectivity service requests, the TeraFlow OS components to handle the requests, and the data plane. 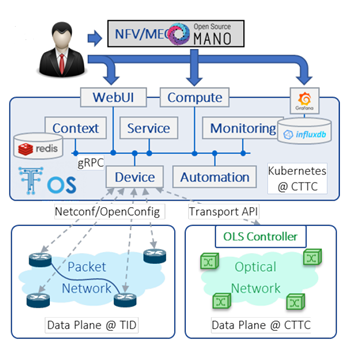 More information can be found at: